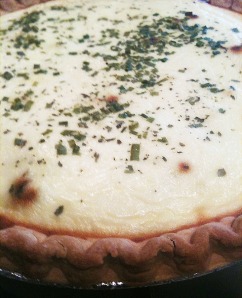 It must be brunch time. Or lupper...

I’m feeling fairly productive today. I started out at 9am by making pie 47, a chicken and greek yogurt Quiché. I would qualify Quiché as a pie, mainly because it has to bake in a crust. I’ve seen so-called Quiché without crust but I think it’s more of an omelette. This one was relatively quick and easy; all told it took an hour and 20 minutes to make. Prep was 20 minutes and bake time was about an hour, give or take 5 minutes.

The Quiché inspiration comes from allrecipes.com with a few mods. The one I made called for sour cream but I didn’t have any so I used greek yogurt. Also, based on one of the comments for the recipe, I made sure to add more salt.

Preheat oven to 400F. Pull your ready-made pie crust from fridge to thaw.

Section your chicken breast into small squares. In medium frying pan, heat some spray oil on medium high. Add your chicken. Stir until cooked. Set aside.

Combine eggs, milk and greek yogurt, mix until smooth. Pour over chicken mixture. Garnish top with Basil and Chives. Or use whatever spices you like as garnish.

Bake in pre-heated oven at 400F for 20 minutes. Reduce temperature to 350F and bake 30 to 35 minutes until inserted knife comes out clean.

After I finished baking, I went outside and cut the yard while waiting for this to cool. Productive:) I had a big slice after finishing the yard and it really hit the spot as a breakfast option. It was moist and tasty. It held together really well too.

And just in case you’re curious about what you’re putting into your gullet… Amount Per Serving Calories: 380| Total Fat: 26.7g | Cholesterol: 117mg. Until next week…

Your Selection For Dinner or Dessert

At home in Round Rock