Greetings and Happy August. It’s still hot in Texas. Pie number 36 comes courtesy of my wife Tammi, and The Gourmet Cookbook, by Ruth Reichl. This one is unique for its pie crust, which is originated, if you will,  from coconut meringue. The recipe was mildly complex, so I leaned into the making of it.  Now my back is sore:) I didn’t want to take anything to chance so I spent some time studying the recipe before baking, and while I was creating it. I didn’t stretch because I didn’t realize it was going to be an exercise. And, action…

Place rack in center of oven and pre-heat oven to 250F. In a bowl with an electric mixer beat the egg whites with the salt until they are foamy, beat in the cream of tartar, and beat the whites until they hold soft peaks. Beat in the sugar, a little at a time, beat the meringue for 5 to 7 minutes, or until it is stiff and glossy and the sugar dissolved; fold in the coconut.

Drop heaping tablespoons of the meringue evenly around the edge of a 9.5 inch pie plate, spreading the meringue with the back of the spoon to form the side of the shell, and spread the remaining meringue evenly over the bottom of the pie plate. Bake the shell in the middle of a preheated 250F. oven for 1 1/4 hours, or until meringue is firm and very pale golden, turn off the oven, and let the shell cool completely in the oven with the door ajar, about 45 minutes.

Using a sieve over a medium size bowl, remove grapefruit from peel and membrane and place in sieve to allow collection of juice. This is going to take you a while. I enjoy making pie; it was still a pain in the butt.

In a small bowl sprinkle the gelatin over 1/4 cup of the grapefruit juice and let it soften for 1 minute. In a small saucepan whisk together the egg yolks and the sugar, add the remaining 1/2 cup grapefruit juice, the gelatin mixture, and a pinch of salt, and cook the mixture over moderate heat, whisking, until it registers 160F on a candy thermometer. If you don’t have a candy thermometer, cook about 3-4 minutes.

Pour the filling into the shell, smooth the top, and chill the pie, uncovered, for 3-4 hours, or until the filling sets completely. (If the pie will be chilled for more than 4 hours, cover it with plastic wrap or wax paper.) Just before serving garnish the pie with the grapefruit sections if desired.

The grapefruit is subtle in the taste of the pie, as is the cream cheese. Good balance. The texture of the grapefruit, coconut and the meringue crust is something I like. Tam likes it which is saying something considering she’s not a big pie person. The kids pooh-pooh it though. They aren’t fans of the grapefruit.  Ah well, adult scale is positive, kid scale is fail.  I’m also happy for the selection. It was a good one. Thanks honey.

Happy Easter! It’s been a busy weekend. Getting ready for Easter Sunday. Easter egg hunt for the kids on Sunday morning. The Easter Rabbit brought the kids an Xbox Kinnect but didn’t bother to set it up. So I took care of that too. We also have a BBQ at friends today. I made Coconut Key Lime pie for the event. Actually I made two. The below recipe yields one pie. The recipe comes courtesy of Martha Stewart.

6 ounces cookies (about 12 graham crackers or 46 vanilla wafers or 30 chocolate wafers, such as Famous)

Preheat oven to 350 degrees. In a food processor, pulse cookies until finely ground (you should have about 1 1/2 cups). Add sugar, salt, and butter and pulse until combined.

Firmly press crumb mixture into bottom and up sides of a 9-inch pie plate. (If using a springform pan, press crumbs halfway up sides.) Bake until crust is dry and set, about 12 minutes. Let cool completely in plate on a wire rack before filling.

Preheat oven to 325 degrees. In a medium bowl, whisk together condensed milk, coconut milk, lime juice, and egg yolks until smooth. Pour into crust and bake until set but still slightly wobbly in center, 40 minutes. Let cool on a wire rack, 1 1/2 to 2 hours, then refrigerate 3 hours (or up to 1 day).

In a large bowl, using an electric mixer, beat cream and sugar on high until stiff peaks form, about 3 minutes. To serve, top pie with whipped cream and sprinkle with toasted coconut.

The pie is really tasty but quite heavy.  Smaller slices will do quite well. The whip cream is thick,  fluffy and sweet,  they custard is rich. The graham craker crust is my new favorite. It’s very simple and holds to the custard well so you get the full range of texture and taste.

Happy New Year! Tammi and I just got back from Louisiana so the pie adventure was pushed to the weekend. It was also Olivia’s birthday on 12/31 so  fun, games and parties were to be had. I decided to make the pie the day of Olivia’s birthday party at our house, figuring it wouldn’t take too long. Wrong! And cooking while 8-10 screaming 10 and 11 year olds, (along with parents coming and going) added an element of mild frenzy to the whole exercise.

About 2 hours prior to the party I went shopping for the ingredients I needed. Locating the supplies was slightly confusing. Mostly because I couldn’t figure out where corn starch and coconut milk were on the aisles of the local HEB. coconut milk was in the condiments and international food aisle.  Corn starch, I thought, would be somewhere near the flower. It wasn’t.

I made a simple pie crust from scratch. A basic pie crust:

Combine the flour and salt in a mixing bowl. Cut the vegetable shortening and butter into small chunks and add to the flour mixture. Blend the mixture until it has the consistency of wet sand with a few pea size pieces of butter and shortening remain. Mmmmmm, sand. Using a fork or whisk, beat the egg with the vinegar and water. Slowly pour over the egg mixture over the flower, stirring until the mixture is moist. The dough should stick together and hold the shape of a ball. Divide the dough into two, and wrap in plastic wrap. Chill in refrigerator a minimum of 30 minutes. For this pie, only one piece of the dough is needed. I used the other to fill in any cracks to the dough I put in the dish.

Roll dough from center to edge until crust is desired thickness (usually 1/8″ thick) and at least 1″ wider than pie plate. It the dough sticks to the rolling-pin, try placing cellophane over dough and then roll it out. Remove the plastic wrap and transfer to pie plate by rolling the dough onto the rolling-pin and then positioning it over the plate. If the crust is sticking to the rolling-pin surface, carefully separate it by sliding a sharp knife or spatula between the crust and rolling surface. Carefully press the dough into the pie plate. If cracks appear, use lightly floured fingers to push the seams back together.

Preheat the oven to 425 degrees. Prebake for 15 minutes.

The dough will last up to 3 days. If you want to freeze the extra crust, roll out the dough and line the plate you’ll be using. Once the crust is frozen, remove from you plate and freeze in a large freezer bag. It’ll last for up to 3 months.

And now for the coconut cream filling:)

1/4 cup cornstarch (note: cornstarch and corn meal are not the same thing!)

Start by spreading the 1/4 cup sweetened flaked coconut onto parchment lined cookie sheet and bake at 375 degrees F for 15 minutes. Set aside for topping. Using a fork, beat the egg yolks in a small bowl. Combine the sugar, cornstarch and salt in a larger saucepan. Slowly whisk in the milk and coconut milk over medium heat. Continue to whisk until the mixture comes to a boil. Cook for 1 minute, still whisking. Quickly transfer half the milk mixture to the bowl holding the egg yolks. Whisk to combine, then return the egg and milk mixture to the saucepan. Return to a boil and cook for 1 minute, whisking continuously. Remove from heat. Stir in the butter, vanilla and unsweetened coconut into the milk mixture. If, by some accident, you purchase even more sweetened coconut flake, take heart, it just makes the pie taste that much sweeter… Pour custard mixture into the pie crust. Cover with plastic wrap to prevent skin from forming on the top of the custard. Let it cool and then refrigerate for 2 hours. Once set, beat the cream, confectioners sugar and coconut extract using and electric mixer until stiff. Remove the pie from the refrigerator. Remove the plastic wrap and top custard with whipped cream. Garnish with the toasted coconut.

The girls who stayed for Olivia’s slumber party gave it a thumbs up, and my wife also like it very much. Myself? This one is definitely one of my favorites. The custard held firm, and the crust was flaky and didn’t turn to mush once I poured the custard.

In the new year, I now only have 46 more pies to bake. This is my resolution.

Your Selection For Dinner or Dessert 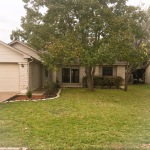 At home in Round Rock