This week I’m bored with sweet pies. Fruit too. I searched through a bunch of recipes this weekend and came upon this one from aaron cindi at allrecipes.com. The crust is a basic crust from the cookbook 500 Pies and Tarts. 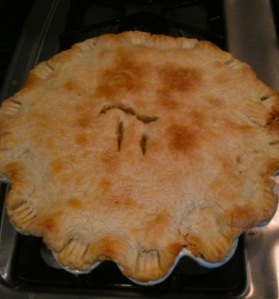 The pie of pie

This pie clocks in at a whopping 858 calories per serving so let’s be careful people!

Combine the flour and salt into a large mixing bowl. Cut the shortening and butter into small chunks and blend into flour mixture using a pastry blender or 2 knives in a criss-cross motion. Blend until mixture has texture of coarse sand with a few small pea size balls of butter and shortening. In a separate bowl, whisk the egg, vinegar and water. Slowly pour into flour mixture and stir only until moist. The dough should stick together and hold the form of a ball. Divide the dough into 2 balls and wrap in plastic wrap. Flatten each into a disk and put in fridge a minimum of 30 minutes.

Please note, if you follow the filling recipe, you will have enough jambalaya for at least 2 large pies. My wife was happy about this; she had a bowl for dinner:)

2 quarts chicken broth, or as needed

1 tablespoon cayenne pepper, or to taste

2. Make a roux (I’m still not sure what this is, even though I made it) with the oil left in the pan by sprinkling it with the flour. Whisk the flour and oil together, and cook over low heat, whisking constantly, until the mixture is a pale brown color. This could take up to 15 minutes; watch carefully so the roux doesn’t burn. Slowly whisk in the chicken broth, about 1/2 cup at a time, to make a thin, smooth gravy. Bring the gravy to a simmer, mix in the cooked sausage, chicken, and vegetables, and cook until slightly thickened, about 20 minutes, stirring occasionally.

3. Mix the rice into the gravy mixture, and simmer until the rice is almost tender, about 15 minutes; mix in the shrimp and cook until they are opaque and pink, 5 to 10 minutes. Season the filling with black pepper and cayenne pepper remove the filling from the heat.

5. Bake in the preheated oven until the crust edges begin to brown, 10 to 15 minutes. Line the edges of the crust with foil, and bake until the whole crust is golden brown, about 5 more minutes.

I have never made jambalaya before so I’m thrilled about it. To put it in a pie is certainly unique but I don’t think it’s totally necessary:) The whole thing put together does taste really nice though. The kids and their friends, who ate over before their big out-of-state  move , did really like it. So this one’s a winner. Thanks Cindi!

This site uses Akismet to reduce spam. Learn how your comment data is processed.